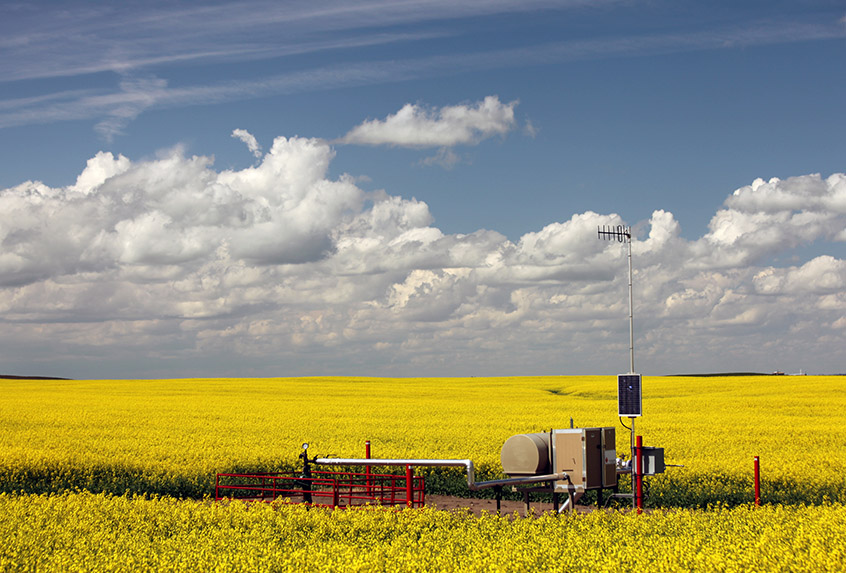 A1.1.1 Groupings for Production Decline Analysis

Different groupings by type of gas well were made to assess well performance characteristics. Conventional, tight, and shale gas wells were grouped geographically on the basis of the Petrocube areas in Alberta, B.C., and Saskatchewan, as shown in Figure A1.2. These wells were also grouped by geological zone. In this analysis, gas production from the Montney Formation is separate from the other tight gas sources. 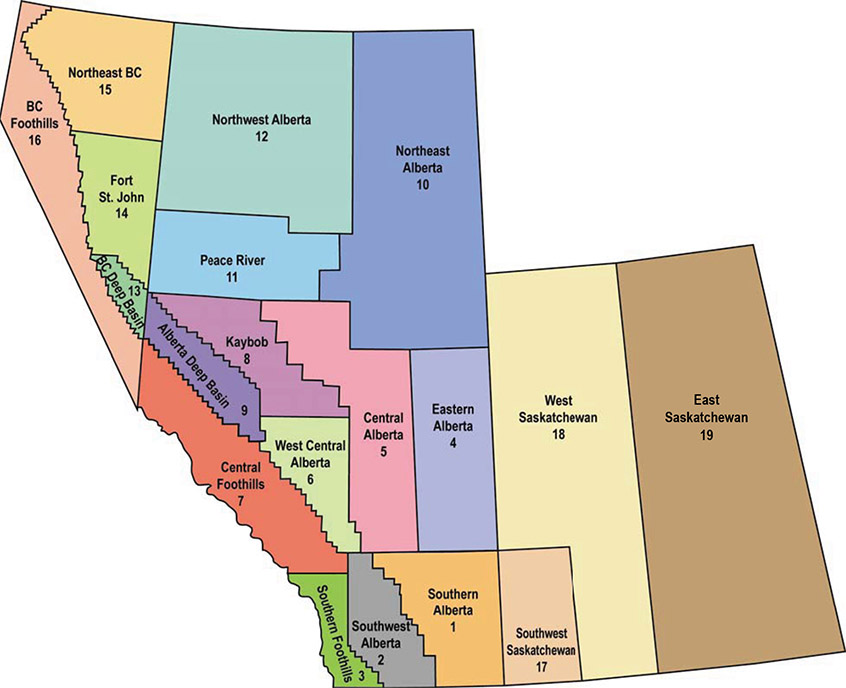 Within each PetroCUBE area and zone, gas wells were grouped by year, with all wells existing prior to 1999 forming a single group, and separate groups for each year from 1999 through 2040.

CBM wells in Alberta were also grouped primarily by zone into three categories:

In total there are about 150 gas resource groupings representing Western Canada, each with its own set of decline parameters for each year.

A1.1.2 Method for Existing Wells

The method applied to make the gas production projections for existing wells differs from what is done to project production for future wells. For existing wells, production decline analysis on historical production data is done on each grouping (gas type/Petrocube area/geological zone and by well year) to develop two sets of parameters.

The data sets for average well production history are created as follows.

Figure A1.3 shows an example of the plots used in evaluation of average well    performance, and the different decline rates that are applied to describe the production. 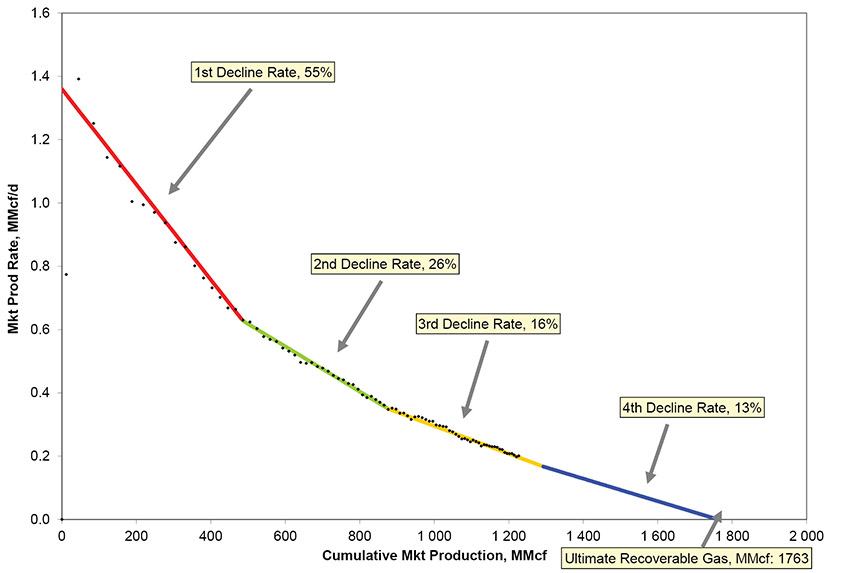 The decline parameters determined in this manner for average wells are available in Appendix A4.

b. Production Decline Analysis for the Group Data: 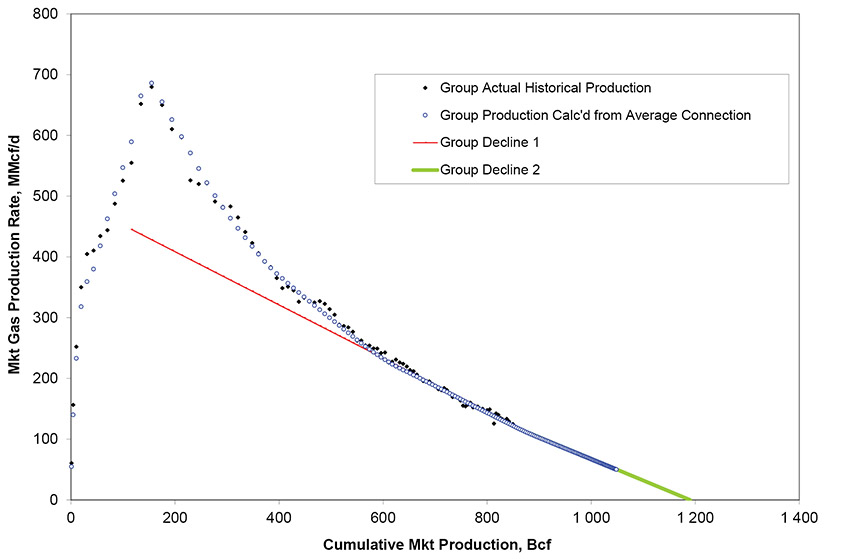 The following group performance parameters are determined from the group plot:

In the earlier well year groupings (2001, 2002, etc.), the actual group data is usually stabilized by the current date at or near the terminal decline rate established via the pre-1999 aggregate grouping. In these cases a single decline rate sufficiently describes the entire remaining productive life of the grouping. In these cases the expected performance calculated from average well data has little influence over determination of the group parameters.

In later well years (2015, 2016, etc.) actual group production history data cannot provide a good basis upon which to project future production. In these cases the expected performance calculated from average well data is vital to establishing the current and future decline rates.

Group performance parameters determined in this manner are available in Appendix A3.

The production decline analysis procedure described above is also applied to the CBM groupings and shale gas. Mannville CBM connections have a different performance profile than the other gas resources in the WCSB. While gas wells for all other groupings can be described by an initial production rate that declines in a relatively predictable manner, Mannville CBM connections go through a dewatering phase with gas production increasing over a period of months to a peak rate. After the peak rate is reached decline will occur. Thus a slightly different set of parameters is used to describe performance of the average well for Mannville CBM, with initial production rate being replaced by “Months to Peak Production” and “Peak Production Rate”.

The shorter production history of shale gas makes it more difficult to establish long-term decline rates based on historical data. Nevertheless, decline rates that describe the full productive life of shale gas wells are still estimated based on the NEB’s view of ultimate gas recovery for the average well.

A1.1.3 Method for Future Wells

For future wells, production is estimated based on the number of projected wells and the expected average performance characteristics of those wells.  The drilling projection is used to estimate the number of future gas wells. Historical trends in average well performance parameters, obtained from production decline analysis of existing gas wells, are used to estimate average well performance parameters for future well years.

In many groupings there are trends of decreasing or increasing initial productivity for the average gas well. Figure A1.5, which shows the initial production rate over time for tight gas wells in the Alberta Deep Basin Upper Colorado grouping. The IP was trending down until about 2006 when horizontal drilling and multi-stage hydraulic fracturing technologies started taking off, which increased the IP over the last decade in this grouping. The initial production rate for future gas wells is estimated by extrapolating the trend in each grouping, and are adjusted if there are any other assumptions such as technological or resource changes. Historical and projected initial productivity values for the average well for all groupings are contained in Appendices A3 and A4. 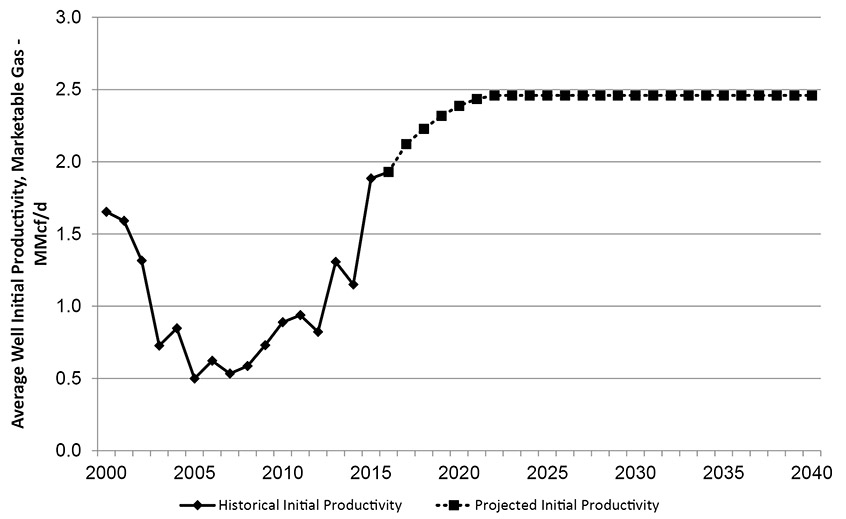 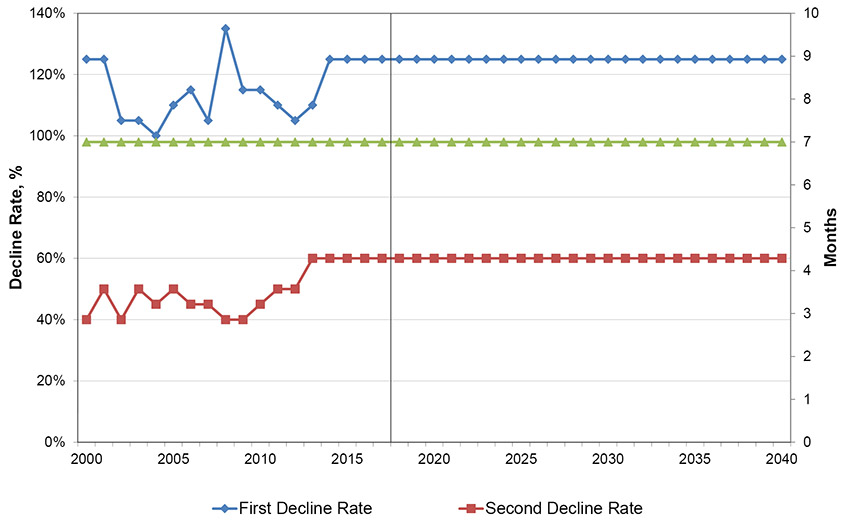 Figure A1.7 shows the method for projecting the number of gas wells for each year over the projection period. The key inputs are amount of re-investment of revenue and the drill day cost. Adjustments to these two key inputs can significantly change the drilling projections. The values projected for the other inputs are estimated from an analysis of historical data.

The Board projects an allocation of gas drill days for each of the groupings. The allocation fractions are determined from historical trends, recent estimates of supply costs, and the Board’s view of development potential for the groupings. The allocation fractions reflect the historical trends of an increasing focus on the deeper formations located in the western side of the basin, increasing interest in tight gas and gas shales in B.C. and Alberta, and further development of liquids rich/wet natural gas. Tables of drill days by year by grouping for each case are in Appendices B1.1 – B1.6.

The number of gas wells drilled in each year is calculated by dividing the drill days targeting each resource grouping by the average number of days it takes to drill a well. Future drill days per well for each grouping are based on historical data, and any assumptions on drilling efficiency or resource changes. Tables of wells by year by grouping for each case are in Appendices B2.1 – B2.6.

A1.1.5 Yukon and Northwest Territories

No production from the Mackenzie Delta and elsewhere along the Mackenzie Corridor is included over the projection, as lower prices have rendered production uneconomic. The Norman Wells field produces small amounts of gas that serve local purposes and is not tied into the North American pipeline grid. Cameron Hills production ceased in February 2015.

For producing wells from offshore Nova Scotia, production profiles are based on the seasonal performance of the two producing projects. No additional infill wells are assumed for the producing fields over the projection period. Production from the Deep Panuke development started in fall 2013, but has since turned seasonal.

Onshore production from the McCully Field in New Brunswick was connected into the regional pipeline system at the end of June 2007 and now operates on a seasonal basis.

Shale gas potential exists in New Brunswick and Nova Scotia, however, provincial policies currently prohibit hydraulic fracturing which is required for shale gas development. It is assumed these policies do not change over the projection period.

A1.3 Other Canadian Production

A minor remaining amount of Canadian production is from Ontario. Production from Ontario is projected by extrapolation of historical production volumes. Shale gas potential exists in Quebec, however, provincial policies currently prohibit hydraulic fracturing which is required for shale gas development. It is assumed these policies do not change over the projection period.

A2.1.1 Production from Existing Gas Wells

A2.1.2 Production from Future Gas Wells

Production associated with future gas wells is calculated for each resource grouping using estimates for production performance of the average well and the number of wells in future years. The parameters associated with both of these inputs are discussed in the sections below. 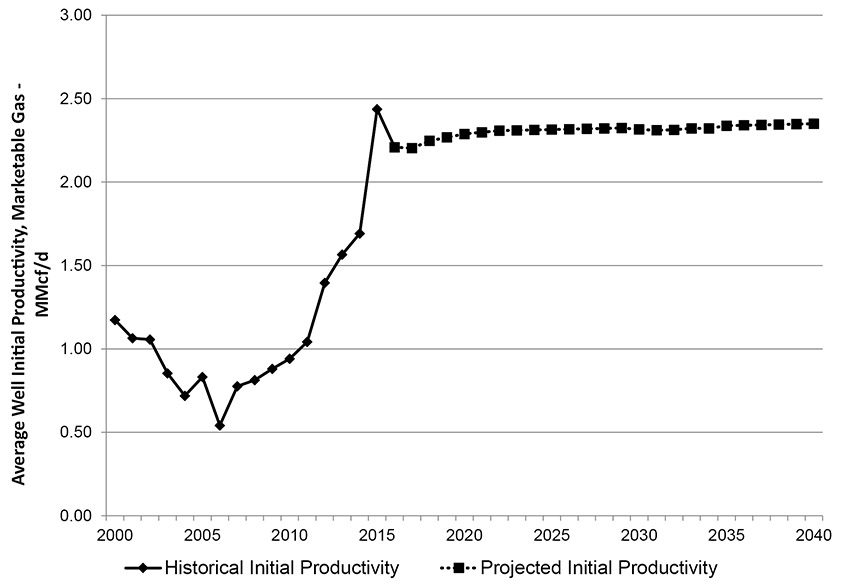 Table A2.1 shows the historical production-weighted average IP for wells by area by year. Appendices A3 and A4 provide historical and projected performance parameters for all groupings.

The performance parameters projected are the same in all cases assessed in this report. Variance between the cases is affected by applying different levels of gas drilling activity as discussed further in Section A2.1.2.2 of this appendix.

Volatile and unpredictable market conditions are expected to be the primary influences on gas drilling activity. As a result, there is a high degree of uncertainty in the gas drilling activity that could occur over the projection period. The High Price Case and Low Price Case reflect a range of market conditions that may occur over the projection period. Figure A2.2 shows the total projected number of gas wells by year by case.
Projected annual gas wells and drilling days for each grouping are provided in Appendices B1.1 to B1.6 and B2.1 to B2.6. 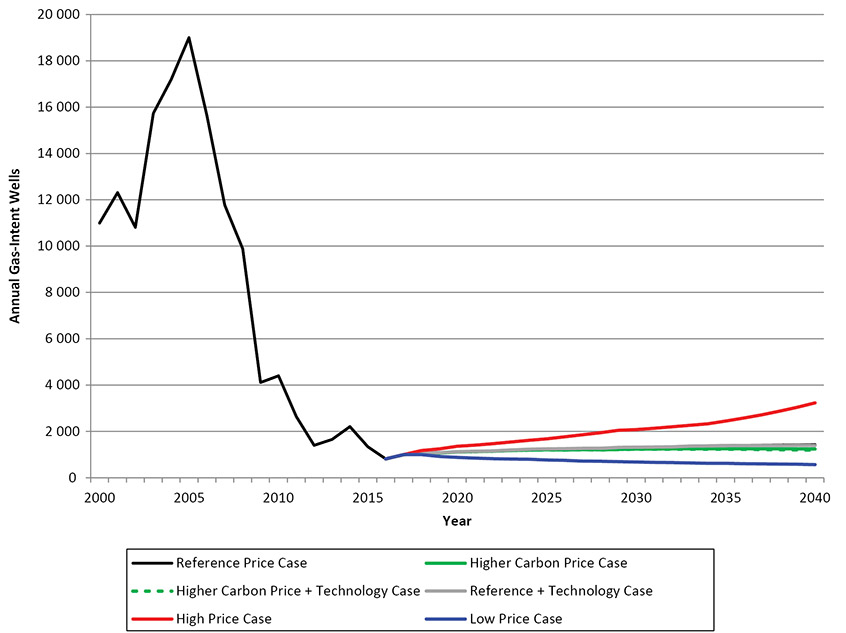 A2.2 Atlantic Canada, Ontario, and Quebec

As indicated in Appendix A1, production from Atlantic Canada and Ontario is based on extrapolation of prior trends. No additional wells over the projection period are assumed to be drilled that would contribute to production at this time.

Provincial policy in Quebec currently prohibits hydraulic fracturing which is required for shale gas development. It is assumed that these policies do not change and no additional gas wells are drilled over the projection period.

Appendix A3 – Groupings and Decline Parameters for Existing Wells

See the Excel Appendix file for all charts and tables in this Appendix, and for Appendices A, B, and C.